Two key indices of essential oil quality are an intriguing aroma and a correct formulation of phyto-chemical components. Aroma is largely a subjective judgement of what people find ‘nice’ or interesting. However, while more educated ‘noses’ can pick up more complex nuances of each oil by way of smell, phyto-chemical norms, set out in commercial and therapeutic standard, have developed as an industry safeguard and a tool for consumers in understanding the essential oil being purchased. Both commercial and therapeutic standards are predicated on phyto-chemical information derived from gas chromatography and mass spectrometry (GC/MS). These technical processes give a snapshot of an essential oil’s main chemistry and the Standards normalize these profiles as species specific balances where the presence of key compounds are notated within an acceptable maximum, minimum range. These chemical ranges and balances are generally perceived as universally accessible indexes of essential oil quality.

The main international Standard for Lavender (Lavandula angustifolia) is set out by the International Standards Organisation (ISO 3515:2002) and also the therapeutic Pharmacopeias of which there are European, American and British (EP, USP&BP) versions. Both Standards present lavender essential oil as dominated by a fairly balanced representation of two primary compounds, the alcohol linalool and the ester, linalyl acetate. There are also two minor level compounds lavandulol and lavandulyl acetate, which while present in quite small percentages are nevertheless important compounds which help to define lavender and are rarely present in any other essential oil. While these key lavender compounds vary within the permissible range, together these compounds are all desirable and should comprise between 60% and 80% of the total oil chemistry. Against these high level compounds also definitively important to lavender oil is low levels of camphor and 1.8-cineole, each, according to the ISO should be less than 1%. The pharmacopeias allow them to be slightly higher up to 1.2% for camphor, and 2.5% for cineole.

The ISO Standards include in their data 13 significant compounds and the Pharmacopeias’ have 10. However, at a broad sweep, the general balance, of the key compounds, are the dominant indicators of commercial accountability with special emphasis on linalool and linalyl acetate. The numerous other compounds (i.e. cis & trans β –ocimene, β carypholene, 3 octanone etc.) making up between 20 – 40% of the oil, and there are many more compounds (some say over 300), which contribute diversity, character and depth to lavender essential oil, than are mentioned in the Standards. Indeed many of these compounds are only detectable with highly sensitive equipment, in specialised laboratories, not normally used for commercial GC readings and are not normally referenced at a commercial level.

Lavandin is a hybridized plant initially derived by way of the natural cross pollination of plants from the L. angustifolia species and the L. latifolia species (Spike lavender) growing in the wilderness of Southern France.  Under cultivation it is reproduced via vegetative cuttings. There are ISO standards for the French Lavandin (L.x intermedia) cultivars Grosso, Abriallis, and Sumian (ISO 8902:2009 www.saiglobal.com) but no therapeutic standard.  In many ways the standards for lavandin are not dissimilar to those of lavender with the balance of the oil still dominated by linalool and linalyl acetate. The key difference to lavender is elevated levels of the camphor (6 -11%), 1, 8 cineole (4 -11%) and to a lesser extent borneol (1.5 – 3.5%) compounds These signature compounds for lavandin essential oil are the bestowed inheritance from their ‘other’ parent species  Lavandula latifolia spp. 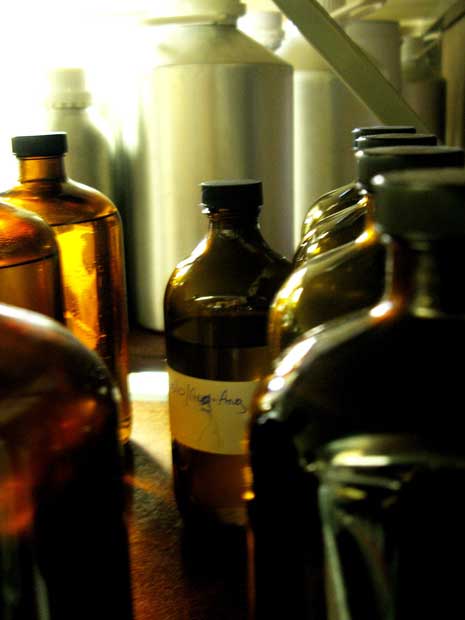