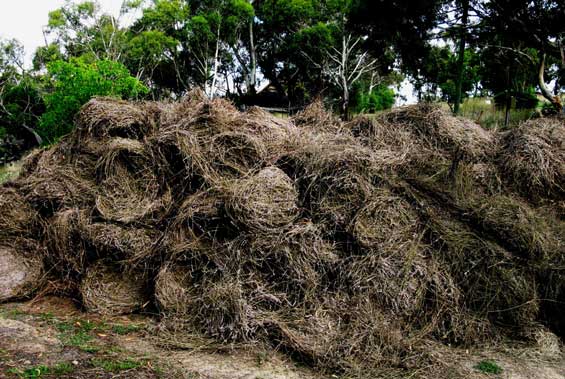 Vermi (worm) Compost is central in the success of our propagation mix and therefore the nursery. In recent years composting at Snowy River Lavender has centred on recycling lavender straw, the biomass left over after distillation. While lavender straw can be difficult to compost, due to its poor water holding capacity, close monitoring of moisture levels in the compost heap and the use of horse manure as the nitrogen source has produced an efficient system for the organic decomposition of this straw, the food source for worms.

Composting is aerobic microbial activity initiated in carbon material through the introduction of a nitrogen rich material such as animal manure and moisture. The process is usually effective around a ratio of 20 Carbon Units to 1 Nitrogen Unit. The initial stage of composting sets in motion an organic complex of biological interactions which encompasses both a microbiological sphere; the subliminal world of microbes and bacteria which sets up decomposition and soil building activity: and, a macro-biological sphere; the visible soil life such as funghi, invertebrates, insects and most importantly worms which refine the decomposing carbon and process the soils mineral content into humus on which plants feed.

Both the nursery and the farm benefit from the worm (vermi) compost and it is through them that lavender becomes part of the farms ongoing cycle of life, and ultimately its sustainability as an organic life form.