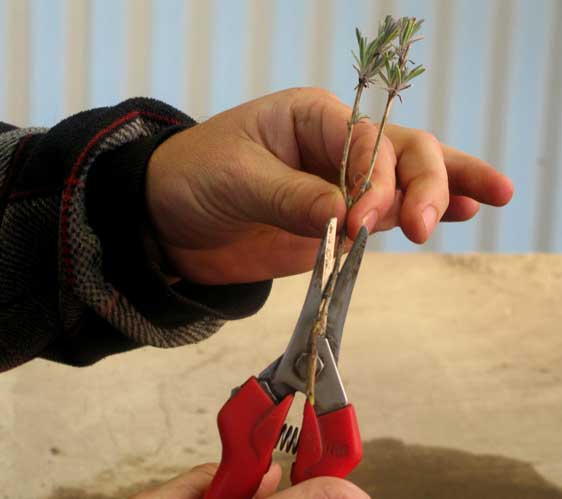 A cultivar is a plant reproduced by way of vegetative cuttings. Significantly, plants propagated in this way replicate exactly the genetics of the parent plant, enabling a uniformly productive farm population. Today the farming of cultivars, both lavender and lavandin, dominate essential oil production worldwide. At Snowy River Lavender, a large percentage of our farm production is also from cultivar stock and furthermore, we are proactively developing and trialling many new lavender cultivars in conjunction with our population or seed grown lavender program. Needless to say, propagating cultivars has been the primary focus of our nursery.

Propagating lavender and lavandin cultivars is a process whereby semi hard wood cuttings are taken from established plants in the autumn or early winter. This vegetative material once taken from the plant is placed in a bucket of worm cast tea until they can be trimmed and dipped in a hormone stimulant, either Easi-RootTM or honey. The dipped cutting is then pressed into prepared trays of plastic tubes (40 – 50mm) filled with our farm formulated propagation mix made up of coarse washed river sand, farm soil, worm cast, perlite and a small amount of dolomite.

Trimming the cutting properly, is critical to gaining a good root strike per tray. The lavenderbush pruning, from which the cuttings are chosen, need to be trimmed of any dead leaves and all cutting of the stem must be on, or, just below a node. A small scrape, or wound at the base of cutting allows the root stimulating hormone to take hold of the stem and roots will usually start from this point. Seeking out both multiple stems, and multiple nodes on each stem, from the rough plant material, works toward both a stronger root system and bushier more productive plants. Using this method we are achieving close to 100% strike rate of healthy and ultimately productive lavenders.

Once full, the trays of cuttings are then placed on heated sand for 6-8 weeks or until roots are evident in the bottom of tray, when they are moved to a sandy/soil area under shade cloth for a further 6 -8 weeks. After this time the plants are placed in a protected but full sun hardening up area with a sandy soil base to grow on until the late autumn planting begins, usually between 9 and 12 months. Primary care in the nursery consists of hand watering, pruning and weeding.